Ever since the iPhone dropped in 2007, the world of ecommerce entered a brave new era: that of mobile online shopping. Over ten years later, everyone in the ecommerce game acknowledges how important mobile is.

Yet today, even as mobile use has exploded, many sites still don’t treat mobile as a entirely different access point with its own unique demands for a great customer experience. But they are, and from homepage design to sales funnel UX, businesses need to treat customers as such.

In this post, we’re going to show you how mobile customers are unique in yet another important area—that of security.

Mobile has fundamentally changed how people feel about shopping online

According to Pew Research, 77% of Americans use a smartphone of some kind, and among people under 50, that number is over 90%. Those numbers shot up very quickly, from just 35% in 2011.

Perhaps even more impressively, 14% of smartphone users now say they are more comfortable shopping on their mobile devices than they are on their personal computers. That’s up from 2% in 2013—a 600% increase!

Mobile ecommerce revenue has shot up, too

All that shows in the sales numbers: during the 2017 holiday season, mobile accounted for 33% of ecommerce revenue. According to Adobe, this is an increase from 27% the year before.

And according to users we surveyed, over 50% of their online purchases are made using mobile devices: 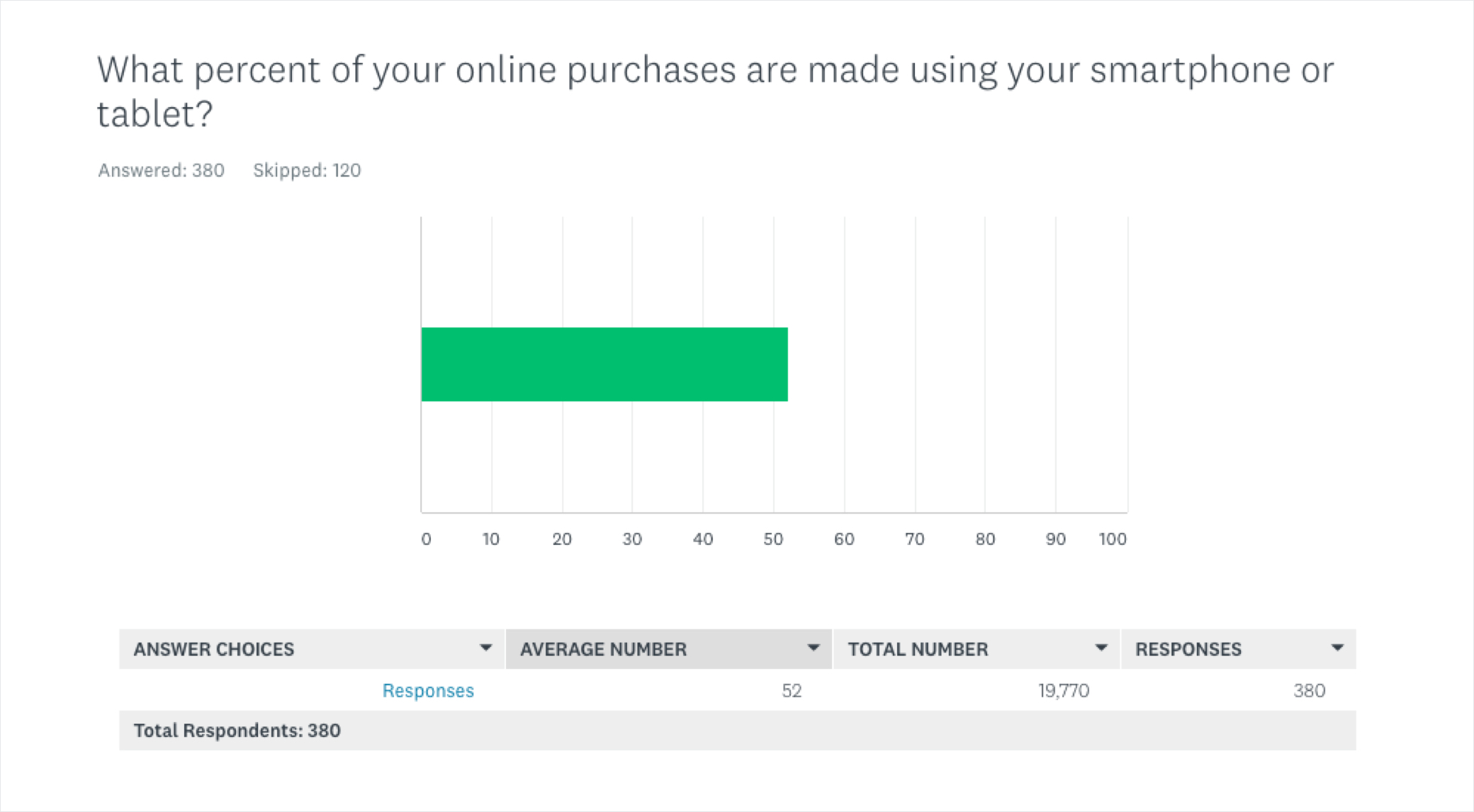 But despite all the uptake in smartphone use, mobile security concerns persist

According to our survey, 67% of smartphone owners say they’re concerned about providing personal information (e.g., credit card, address, phone number) when shopping on their phones.

And 52% of smartphone owners feel unsafe making a purchase on their smartphone from websites they’ve never heard of before.

Fortunately, you can ease those concerns and capture your share of the mobile bonanza

One of the best ways to reduce security concerns that cost your site money is by letting visitors know that your site is secure. And the best way to do that is with a third-party security certification.

The McAfee SECURE certification tests your site for malware, phishing, malicious links, and other things that might pose a risk to your customers. Once you’ve passed that test, you can display the trustmark on your website to show visitors that you’re secure, and that security is your priority.

Here’s how it works

Once a visitor lands on your site, they’ll see the brand new McAfee SECURE trustmark. The new trustmark is smaller than previous trustmarks, and unlike previous versions, clicking on the new trustmark brings up a modal window that lets them verify your site’s security, all while keeping them on your website.

The modal window appears for all versions of the trustmark, which includes the engagement trustmark and the Shopper Identity Protection trustmark.

(Keep in mind that the trustmark loads asynchronously, which means it doesn't slow down your mobile load speed, a crucially important metric for ecommerce conversions.)

When visitors see your trustmark throughout your site — on your homepage, on you product pages, and especially at your checkout — you’ll ease the fears that create shopping cart abandonment and lower your sales rate.

Take a look at a couple of examples

And Inflow, a company that specializes in conversion rate optimization (CRO), ran several tests to determine the effectiveness of security certifications.

They found that while the McAfee SECURE trustmark delivers the highest conversion rate of all trustmarks — including over three times higher than the nearest competitor: 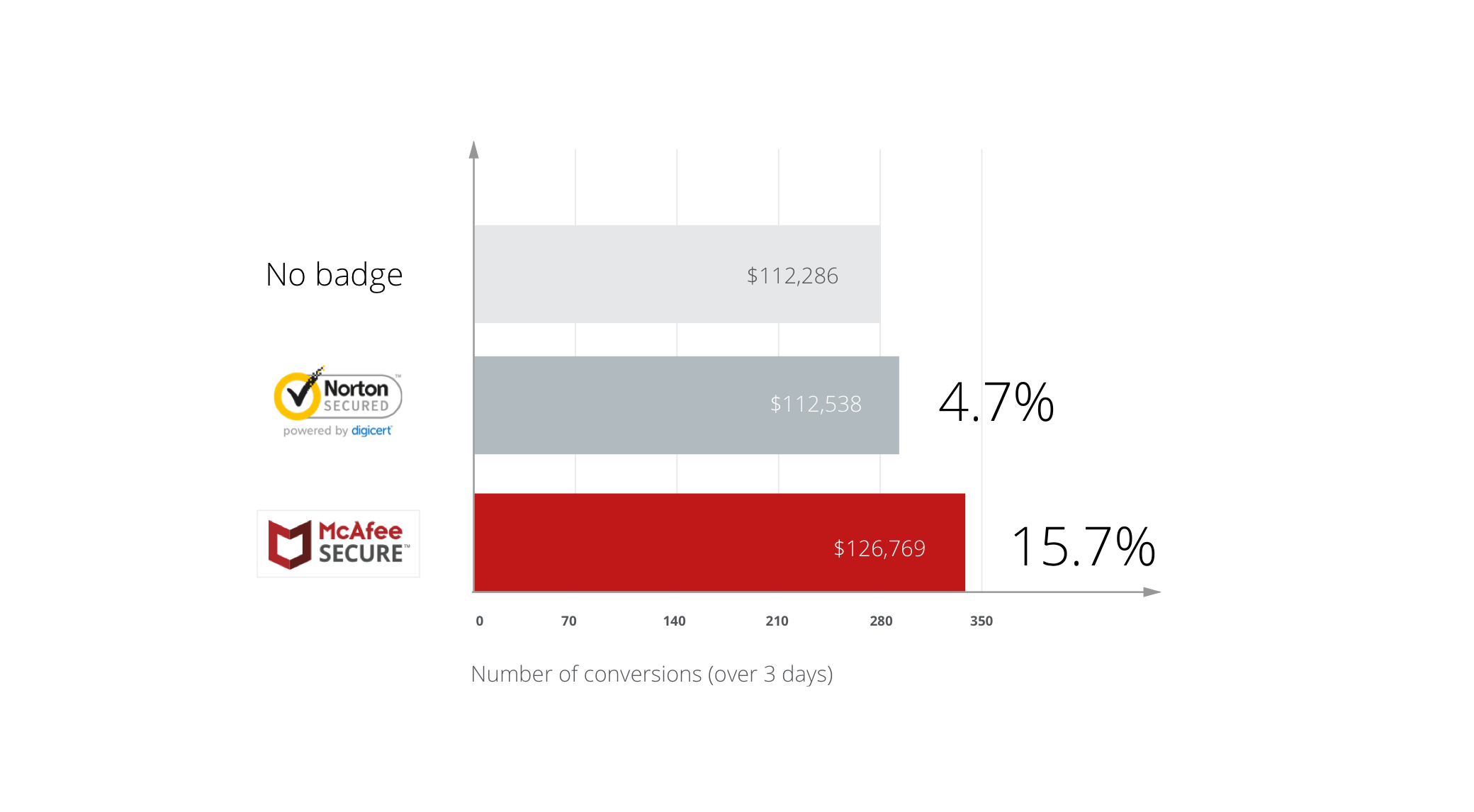 Now you know why security is so important—and valuable—for mobile ecommerce. Here’s what to do about it.

To paraphrase the old Snickers ad, there’s no wrong way to display the trustmark. (Okay, there are definitely some.) But while every site is different, there are a few best practices for trustmarks that we’ve learned over years of conversion testing.

Mobile ecommerce still hasn’t gotten anywhere as big as it’s going to. In the very near future, a majority of people are going to be as comfortable on their mobile devices as they are on their desktop computers.

Remember—these behavior changes we described occurred over just five years. How long before a majority of people feel more comfortable shopping on their mobile devices than on their PCs?

You don’t want to miss out on the shopper of the future — that’s why it’s so important to get your mobile site’s security in place now.